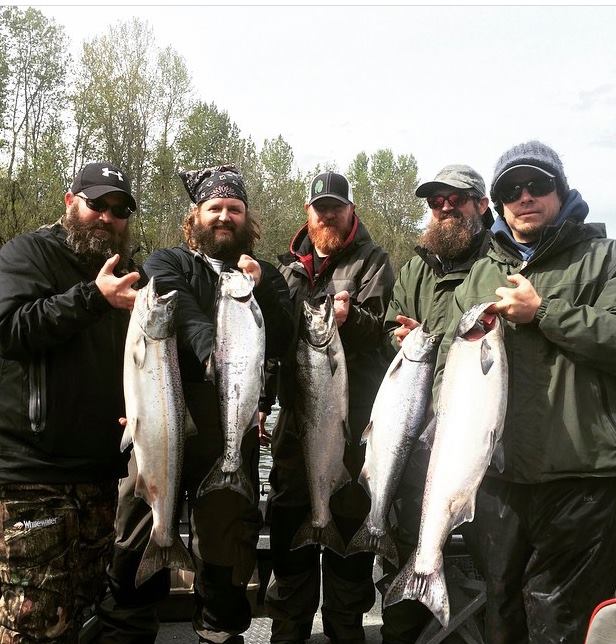 When I first began fishing for fall Chinook salmon many years ago we had just the basics. A tackle box, rod, spinner, and a net, was all the equipment we had to catch fish in the little 12ft. aluminum boat. We caught some fish too.

Although you can get by without electronics, having them makes your time on the water safer and more productive. A good stand alone unit will have a variety of useful functions. I run a pair of Lowrance HDS units in my boat (a 5” and 7” model). With the split screen option having two units is not necessary but I like to have one on chart and one on sonar for a larger display. These have helped my confidence and catch rates.

Since purchasing five years ago they have performed flawlessly under wet and windy Pacific Northwest weather conditions. The ease of operation of these units makes life easy. When you are responsible for navigating busy rivers and watching five rods in the boat to make sure they are fishing, this is imperative.

With an easy format of operation and 8 buttons and a directional pad, the system is very intuitive. You can quickly switch functions from gps to sonar or zoom in and out on the large screens. It also has a variety of features that you can add on like mapping upgrades, Sirius radio and weather, radar, and NMEA 2000. Another feature I love is the easy upgrade of the entire operating system. I just downloaded the 4.1 upgrade to a SD card, popped it in and presto! I now have an upgraded system.

Safety is my primary concern having guests out on the water, everything else is secondary. Having a good reliable chartplotter/gps unit helps provide a higher level of safety.

The salmon often bite best in the very early morning. To get from the dock to where they are, it takes leaving in the dark so you can be fishing at first light. While a gps is not a replacement for a vigilant captain, it can help. Visibility can be down to less than 10 ft. in the heavy fog our coastal river systems see. It is here that the tracks from yesterday can easily be followed to the holes that are holding fish. Without my Lowrance helping to show the way, life would be a lot less safe.

Salmon really like to hug the bottom in a lot of areas, and knowing where that is as the depth changes has increased my hook ups.

Another reason I love my Lowrance HDS units is the ability to change the color schemes of my sonar. In low light, the whites are too bright, in the sun the low light settings are difficult to see. With this feature I have easy viewing of my screen in all conditions. I have learned to trust my sonar, and when you are marking fish that area usually produces bites. I can even make out harbor seals and bait balls.

The water temperature feature has also helped increase my catch rates. I realize now that during my early years I was at a severe disadvantage without any electronics.

The new breed of electronics is so user friendly and reliable that not spending a little extra money on the top of the line electronics will cost you in the end with less fish in the boat. Give them a shot, you will not be disappointed!

Welcome aboard the ‘Hitchhiker’!

There is a saying that nothing lasts forever, and this holds true for the mighty…

Copyright © 2023 On The Line Guide Service

Don't be a fish out of water.

Join our mailing list to receive the latest news and updates from On The Line Guide Service.

You have Successfully Subscribed!